Listen. LVMH is pretty much a super power at this point. The company has acquired most of the top brands and talent. So it’s only natural they would look for ways to groom (read dominate) the next wave of fashion. The easiest way? Start “The LVMH Young Fashion Designers Prize.” The prize is a €30,000 grant and a year long mentorship with the brand. Designers looking to apply must be under 40 and have presented or sold 2 ready to wear collections.

The top 10 finalists, selected by fashion insiders, will go before a panel consisting of heavy hitters such as Nicolas Ghesquière, Marc Jacobs, Karl Lagerfeld, Humberto Leon, Carol Lim, Phoebe Philo, Raf Simons and Riccardo Tisci, as well as Delphine Arnault, Jean-Paul Claverie, and Pierre-Yves Roussel, who will pick a winner.  In addition, for 3 recent fashion school grads, LVMH is offering a €10,000 cash prize and a job for a year. Applications open today and the winner will be named in May 2014. Source

This is pretty much the sickest opportunity, but also the most convoluted ever. Liiiiiiiike to be in the top 10 would be sick all on its own. You get trotted out in front of the top designers today. So even if you don’t win, you are bound to get a job. But ultimately this is about LVMH building their stable. They don’t really want to groom designers per se. They are looking for designers with an established aesthetic and a voice. This is about looking for new companies and talent to acquire.

The Sentence: 5 Years for Gisele & Tom’s Bodyguards (Daily Mail) See Chris Brown –  This is why you hire bodyguards – to take the fall instead of you! DUH!

As the Retail World Turns: Men’s Warehouse & Jos. A. Bank Shuffle (WWD)  *YAWN – deal or no deal??!!?!*
LVMH World Takeover: Arnault’s Holding Company Investigation (WWD)
I would like to point out that I called this last month 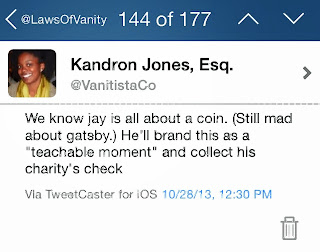 As one of the conditions of his Barney’s Collaboration, Jay will have a leadership role on the Barney’s Discrimination Council. Here’s his statement:

“While I await the findings of the Attorney General’s office, I have agreed to move forward with the launch of BNY SCC collection under the condition that I have a leadership role and seat on a council specifically convened to deal with the issue of racial profiling. I am in a unique position to use my voice to affect change to this disturbing issue. The easy position would have been to walk away and leave policy making to others hoping that someone addresses the problem. I will not leave the outcome to others. I will take this into my own hands with full power to recommend, review and revise policies and guidelines moving forward. I am choosing to take this head on.” (Source)

Ok Hov. Whatever. And you wonder why the elders have questioned your activism. Look – sitting on their diversity board is cute. Maybe even necessary. But IF he was still going to do the collaboration it should have been AFTER they implemented measures to curb discrimination. His statement should have gone something like “I’ve been that kid that was followed in a store. I believe in my collaboration with Barney’s but will not introduce it until I can be sure that my fans will be able to walk into the store and purchase items that I curated without being hassled and or arrested.” They could have even played it as a Christmas in July moment. But this is wrong. And about money. And I’m over it. Stand for something or fall for anything.

Estée Lauder may be in talks to acquire Butter London. (Source) This is a good move for all parties. For Estée Lauder, they capture a younger, more hip base that Butter brings to the table. For Butter, now is the time to capitalize on the nail polish surge that happened over the last two year because I suspect it will start to decline. Yes, we are all still loving our yummy lacquers but chances are we have all the colors we need by now. Further, these things are cyclical. Last season everything was bright, now many of us need to cleanse our figurative palettes a bit. Even I have noticed myself drifting away from bolder colors in favor of soft and neutral tones. Now is probably the time Butter can demand the highest price for their offerings.

Can I be completely honest? ANY time I have a chance to slap David Beckham’s gorgeous face on a blog, I’m doing it. So yeah. This isn’t about this collaboration, so much as it is about him. Bask.

Now – on to the collaboration. Not only will he be the face of Belstaff for their 2014 Biker inspired biker ad campaign, but Beckham will also be designing for the brand. Double checks!! The collection will be revealed later today in a secret location. Stay tuned here and on my twitter (@lawsofvanity) for updates. Source