The Model Alliance, a non profit created to improve working conditions for models, has introduced legislation to ensure models are paid fairly for their work. The Freelancer Payment Protection Act sets out to ensure
(1)   freelancers are paid the agreed upon rate for their work, within a reasonable time
(2)   all terms are written in a contract and retained by the client for 6 years
(3)   the Department of Labor can issue violations and oversee payment
In addition, the act allows the Department of Labor discretion to grant freelancers interest on the money owed and lawyer’s fees, and liquidated damages up to 100% of the amount originally owed. The act has already passed in the New York State Assembly and is review in the state senate.
Currently, only employees can file claims through the Department of Labor, freelancers must file through small claims court, as freelancers are considered independent contractors not employees. Essentially this is a cost and efficiency matter. It is cheaper to go through the Department of Labor because after it receives the complaint it investigates and file on behalf of the freelancer.

I think this legislation could be helpful, but it is skirting around other major issues. First, this law assumes models are being paid in money. Marc Jacobs and other companies pay models with clothes. So should this act include the value of the clothes? Next the agencies are in the way. In most cases, models get jobs through their agency. So, it could be a challenge to even ascertain who owes the model. I think there needs to be more regulation on the agencies, as they are the middle man and the point at which money actually changes hands.

Last week was a busy one in the land of fashion law. And not just with the infringement we’re used to seeing, but also in international legislation, employment, and securities.  Here we go:
INTERNATIONAL LEGISLATION
Israel passed a law preventing models with a BMI below 18.5 from appearing in ads, commercials, and magazines. The law was designed to decrease the occurrence of eating disorders among Israeli models. In theory, it would also prevent normal sized young girls from negative body image issues that may come from comparing themselves to models, which may cause eating disorders and psychological damage.
I definitely respect the aim of the legislation. However, I think there needs to be a widespread movement in the fashion world to combat eating disorders. Alternatively, if countries more invested in fashion passed such laws perhaps they would stick (i.e. US, France). But for now, Israeli models will simply take their pride and eating disorders to countries where the fashion world operates on a “by any means necessary” approach. The models that stay risk the chance that they will not work elsewhere (if they don’t fit the standards). EMPLOYMENT LAW
Alexander Wang is under fire over working conditions in his factories or sweatshops depending upon whom you ask. In a lawsuit by 30 of his employees, they were overworked (80-90 hours per week) and paid no overtime.  But last week, the plaintiff moved to discontinue the case without prejudice so they could change counsel and bring it again at a later date.
Whether it actually happened or not, this is not the type of claims Wang wants associated with his brand. But 30 people. EEK!! Stay tuned for updates on this one. SECURITIES
Michael Kors is selling another 25 million shares at $47 per share to raise $1.18 BILLION dollars. Everything is great over there at the moment. Emphasis on at the moment. May revisit this story. Its truly interesting how going public can affect companies.
COUNTERFEITING
Coach won a $5 Million lawsuit against a Tennessee flea market for selling counterfeits. Hooray! Down with knockoffs!!!
What do Primark and Chanel have in common? Possible infringement. While it is difficult to get protection for fashion under the law, 2 things are clearly protectable under copyright- textiles and jewelry.
While the copy is not identical, Primark was certainly “inspired by” the Prabal Gurung resort 2012 prints. That could be enough. Copyright protection is extended if the two items are substantially similar. I would say they are. This is not so uncommon, as Forever 21 and Urban Outfitters are always getting hit with these types of suits, which usually settle out of court. 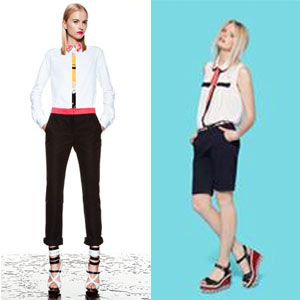 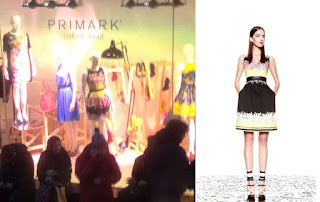 Chanel also had an issue with possible infringement. Pamela Love produced the crystal bangle for its Fall 2011 collection. Chanel showed an almost identical bangle in Fall/Winter 2012. This possible infringement I think is a bit different because it is trend based. Trends appear because multiple designers do the same thing in the same season. This looks like stones thrown on a bangle, not an intricately designed textile as above. Either way, Chanel has since decided not produce the crystal bracelets this season. 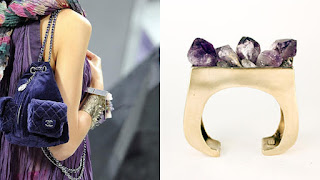 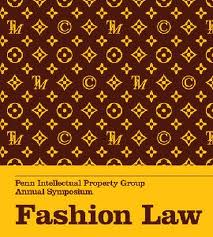 A couple days ago, we talked about the Navajo Nation which may get into trouble for under policing their mark. Today we are on to Louis Vuitton, which seems to police its mark to the maximum allowable extent. Louis Vuitton sent a cease and desist letter to the U Penn on account of fliers for a fashion law symposium citing infringement and dilution. The flier features Vuitton’s circle with four-leaf flower inset, a curved beige diamond with a four-point star inset, and the negative of the diamond design elements. In place of the LVs there are ™ and © symbols.

Dilution prevents people from using a trademark in a way that would lessen the mark’s uniqueness. The University argues the flier is a parody, which is allowed under law. They also submit that the flier is for an educational, not a commercial purpose which constitute fair use. Therefore, Louis Vuitton is barred from a dilution claim.

The bottom line is this: No one is confusing with this flyer as any commentary about or for Louis Vuitton. They need to chill out. First, the flyer is geared at students interested in fashion law. FASHION law. These people know fashion and are well versed in brand imagery. Further, Louis Vuitton’s toile monogram is one of, if not the, most recognizable monograms in the world. It is highly unlikely that anyone with ¼ of fashion sense would confuse that flier with Louis Vuitton. And lastly, they are threatening a group of burgeoning attorneys that are interested in progressing the Innovative Design Protection and Piracy Prevention Act and future legislation which could afford them and the fashion world more protection as a whole. Is this really how you want to spend your time LV? Really?!?!? 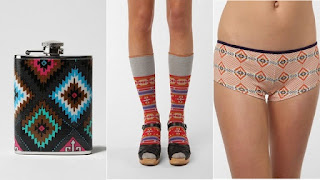 The Navajo Nation is suing Urban Outfitters for use of the Navajo name on  a number of items, including underwear, jewelry, and a flask. Under the Federal Indian Arts and Crafts Act, it is illegal to sell arts or crafts in a way that suggests they are made by American Indians when they are not. They also have trademarks registered on the Navajo name for apparel, shoes, housewares and textiles. They are seeking money damages and a permanent injunction to stop Urban Outfitters from using “Navajo” or variations of it on its products.

Urban Outfitters’ argument is there is no likelihood of confusion. In addition, they cite a widespread use of “Navajo” in non nation produced items over a number of years. To that, the Navajo Nation’s attorney told the Associated Press

“the widespread use of the word “Navajo” on products does not make it an acceptable practice, nor does it go unnoticed… the tribe’s resources are limited and the Navajo Nation must prioritize the actions it taken… In this case, the level and degree of egregious behavior and harm to the Navajo Nation factored heavily into the Navajo Nation’s decision to act.”

I hope this statement does not come back to haunt him. Under the trademark statute, the holder is required to police the mark. If a party fails to adequately police the mark, they may suffer termination of rights due to abandonment. This attorney just conceded that they are selective in policing the mark.

But here’s the thing UO… you can’t be so overtly politically incorrect in the process of infringing and expect not to be chastised. You put the name on a flask. A FLASK!! So beyond just regular, garden variety infringement, it reinforces a negative stereotype of alcoholism within the Native American community. Of course they filed suit. I think it was more of a moral issue than anything else.