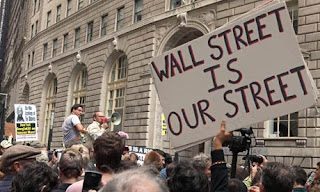 Some of the protestors are attempting to trademark “Occupy Wall Street” to prevent improper use. The “Occupy _____” movement has been huge, and much needed, over the last few months. It has tackled many issues, including collusion [and corruption] within the banking industry. I think this is a smart move on behalf of the protestors. I can imagine a scene where in true American capitalist fashion, someone could make lots of money branding a tee shirt line to capitalize on the popularity of the movement. Yes these people already exist, but perhaps these oxymoronic vendors could be stopped.

The big problem is that the protestors aren’t exactly using the slogan in commerce, a requirement under the trademark statutes. Plus, the government frowns upon trademark blocking or reserving a trademark just so someone else can’t have it. And it seems they have already admitted to do just this. Further, I’m not even sure it’s a strong enough mark to warrant protection. It changes according to the city, lacking the consistency required by the statute. There is “Occupy Wall Street,” “Occupy Philly,” and “Occupy Oakland,” just to name a few. The only thing that really remains the same is the word “Occupy” and I am POSITIVE that is not enough to warrant trademark protection.

So, while I would like to see the protestors keep their slogan out of the hands of the greedy, I’m not sure the law will allow it.