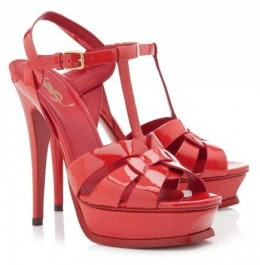 The judge went too far in deciding on this preliminary injunction when it could have been easily wrapped up in a couple sentences. The trademark given was TOO broad. Far too broad.

A trademark may be granted for a mark “which has become distinctive of the applicant’s goods in commerce.”[ii] The applicant must provide proof of “substantially exclusive and continuous use… for the five years before the date on which the claim of distinctiveness is made.”[iii] On January 1, 2008, Christian Louboutin was granted trademark number 3,361,597, also known as “the Red Sole Mark.” The mark was for the lacquered red sole on women’s high fashion designer footwear. The mark claimed “the color(s) red.”

It is undeniable to anyone with half an interest in fashion or celebrity culture that the red bottom is synonymous with the Louboutin brand. It has been worn on red carpets, in magazines, by Oprah, referenced in pop songs, and everything in between. It is distinct. The company has been using the mark season after season in commerce since 1992,[iv] satisfying continuous use requirement.

While the company has been using the specific color red exclusively, it has not been using the color red generally, as suggested by the trademark. The general color red is not distinctive. The trademark is not descriptive enough for any court to offer protection to this mark. Realizing as much Christian Louboutin provides more description in the pleadings and narrows the color to “Pantone No. 18-1663 TP or Chinese Red” and protection to high heeled shoes.[v] However, a company cannot amend a trademark application in a pleading, so this narrowing attempt was a fail.

This is where the issue should have ended. As the opinion states “A competitor examining the Louboutin registration drawing for guidance… may therefore remain unable to determine precisely which shade or shades it encompasses and which others are available for it to safely use.”[vi] The trademark is not valid making all other points null and void. But in true justice system fashion the judge went to the ends of the earth and decided issues not even necessary to rule on this preliminary injunction.

A trademark may not be granted if the mark is functional.[vii] Aesthetic value that may not be duplicated with an alternative is sufficient to make a mark functional.[viii] Here is where Yves Saint Laurent comes into play. The infringing shoes were a part of monochromatic looks in YSL’s Cruise 2011 Collection, where looks were presented in all red for aesthetic effect.[ix] The court states that by ruling in Louboutin’s favor, “Louboutin would thus be able to market a total outfit in his red while other designers would not… allowing Louboutin to paint with a full palette” where other designers could not.[x] In this quote, the court evinces a belief that the aesthetic value would be unable to be duplicated, making the mark functional.

To the court’s credit, this is a bit of a sticky situation. However, a company could use an unlacquered red bottom. Nothing about that would infringe even upon the ill fated trademark discussed above. Or a different texture in the same red. The trademark does not ban that alternative. The point is there are alternatives. Red is not Louboutin’s hostage.

The court spent five pages analogizing high fashion to high art. By itself, this is not a reach but the analogy on which this premise is based is just not relevant. The analogy started with granting Picasso a trademark on his “distinctive indigo” used to depict the color of water, declaring it “the color of melancholy” for Picasso’s “Blue Period”. The court continues by imagining a scenario where Monet wanted to use the same blue for his “Water Lillies” but couldn’t because Picasso owns said blue, excuse me indigo. To top it off, in the next sentence the judge discredits all the distinguishing characteristics of this analogy “putting aside the thousand technicalities lawyers would conjure and quibble about in arguing why the imagined case is inapposite or distinguishable from the real controversy before the court.”[xi]

I had to take a moment to laugh out loud at the whole two paragraphs. First, it attempts to undermine everything lawyers are trained to do. Given that he is on the bench, it can be assumed this judge too was trained to DISTINGUISH CASES like any other lawyer. There are no lawsuits if things cannot be distinguished and gray areas to be argued before the court.

Secondly, the fallacy with the analogy is clear. Water. Is. Blue. Water appears in nature blue and all shades of it. The color blue is not distinctive as required by the statute, so Picasso would have never been granted a trademark on blue water. Shoe soles do not appear in nature at all. Further if we are considering the your local Neiman Marcus as “nature” soles are typically neutral. Or black.

Additionally, the canvas in this case is the shoe itself, not the sole. Louboutin has not attempted to prevent the use of this special red with respect to shoes as the court suggested. It is the bottom of the shoe that is the brand, not the shoe itself. Other designers are free to use “Louboutin Red” on every other place except the sole of the shoe. And let’s face it, few people in our overly consumerist society were worried about color on the bottom of the shoe was until it became fashionable and enviable to have THAT red bottom.

Then the court finishes out with MY favorite of all favorite legal catchalls. The floodgate. The judge explores the floodgates being open to color branding in “low fashion” or other types of shoes. He also postulates that a ruling in favor of Louboutin would open up the floodgates to additional litigation, writing “designers of dresses, coats, bags, hats and gloves who may conceive a red shade for those articles with matching monochromatic shoes would face the shadow or reality of litigation in choosing a band of red to give expression to their ideas.”[xii] Ok. This is a reach because the trademark, assuming its validity, only covers the SOLES of women’s high fashion design footwear. So why are we talking about dresses. And coats. And bags. And hats. And gloves. Further, if we are assuming this would be the precedent, it may apply to lining of those things because that is most closely related to the sole.

The court continues to fear the floodgate, stating “Louboutin’s proposal would have the effect of appropriating more than a dozen shades of red – and perhaps other colors as well,” citing the hues of other colors used to make Chinese Red.[xiii] Certainly there are many colors that make up any one color but Louboutin Red is unmistakable. It is not purple. It is not yellow. It is not even pink. It is red. Bright. Lipstick. RED.

In addition to the asinine parallels the judge drew in this case, I resent the tone of this decision. From the first sentence, it was DRIPPING with condescension including “Thus, at any moment when the market and the deities of design, by whatever fancy they decide those things”[xiv] [emphasis added} and concluding the analysis of the claim under the Lanham Act (Trademark statute) with the sentence “ the Court cannot conceive that the Lanham Act could serve as the source of the broad spectrum of absurdities that would follow recognition of a trademark for the use of a single color for fashion items.”[xv] [emphasis added]

In my humble opinion here we have a judge who believes this is just about color for some “silly little shoes” and it is “not that serious.” From the tone of the opinion, I would go so far as to guess this judge could care less about this issue at all. THAT is the real issue. Not to mention the irony of the fact that THIS judge likened high fashion to fine art after otherwise belittling fashion throughout the opinion goes further to show just how contorted his logic. Further, the fact that he had to liken fashion to something else to wrap his mind around it shows a lack of interest in acknowledging fashion as its own entity.

Fashion is a multi-billion dollar industry. Not only do we wear it, we watch it (there are entire cable channels devoted to fashion), and everyone wants to be a part of it, present company included. To undermine the protection of hard work, creativity and branding by calling it a “broad spectrum of absurdities” is appalling.